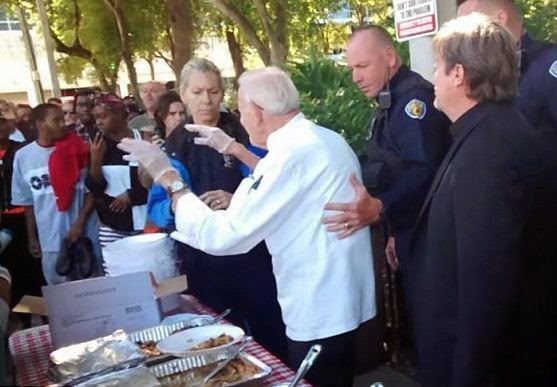 A-Z Challenge = P=Police, Policy, public land, personal care.
The picture is truly the nicest picture I could find where police are interacting with homelessness.  I say the nicest because in story after story, picture after picture, video's too numerous to count...Police harass homeless, arrest homeless, talk horribly to them, and in a few recent cases kill them.  This picture they are arresting the wonderful old gentlemen in the white jacket who's prepared meals for the homeless.  This took place in Ft. Lauderdale.  This 80+ year old man has been arrested multiple times, his food thrown out, and the homeless made to scatter.  There's an ordinance in Ft. Lauderdale against feeding the homeless.  This man has fought each arrest and has won and returns to his mission, only to be arrested again.  The last time I read, the police were told to leave him alone.........however, what about other people in that city, other locations where someone wants to help?  The ordinance hasn't been changed.  And sadly, Ft. Lauderdale is NOT the only city with such an ordinance. 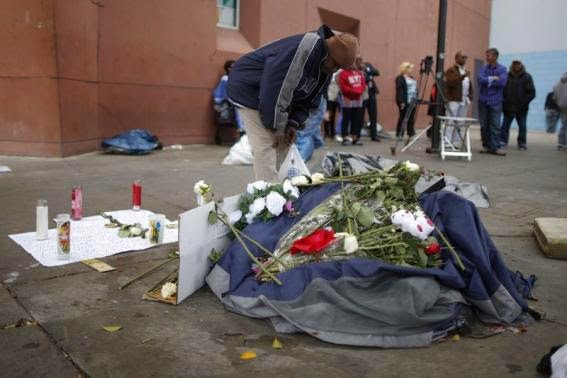 This is a memorial of a homeless man who was killed by The LA Police Department.  The man allegedly didn't stop after he'd been tased and so he was shot by 3 Policemen.  This happened on skid row, when police responded to a call about a robbery.  Things escalated, the homeless man didn't want to go with the police, and he fought them and lost his life.  I didn't find information that indicated whether or not he was in fact quilty of said robbery.   The homeless community there with him on the sidewalk was outraged, as were some passers by who felt it wasn't handled very well.  The point is, being Homeless is NOT a crime, but being homeless is indeed criminalized in many cities across the country.

Detroit has a practice of "dumping" homeless.  In tourist friendly areas police round up homeless and in essence kidnap them, put them in police cars and vans and drive out of the city or to a lesser populated area of the city and literally, DUMP the homeless.  There is a law suit currently about this practice.  The area they've been taken from has warming areas, and other services needed by the homeless, so often they painstakingly return to the same area.

Recently in New Mexico a homeless man was shot in the back (multiple times), police say he was going for a knife.  They may stand trial for murder, that's yet to be determined.  He had a camp set up on the outskirts of the city,  and they wanted it gone .

Tent Cities in New Jersey, California, Florida, Colorado, Hawaii and Virginia and more are being raided by police. By raided, I mean people are told to vacant and their items are trashed if they don't comply immediately.  One city has a brochure suggesting people trim all their bushes and trees and clean out any brush so there's not place hidden where homeless might live or set up for the night.

While being homeless isn't a crime, almost everything associated with it is.  It's a crime to panhandle, sleep in a park or on a bench, or sit in an alley, to camp on public land.  It's a crime to lotter...and many homeless must lotter during the daylight houses, walk the streets etc until it's time to get into a shelter.  So, you see it's quite a vicious circle.

Many police departments consider homeless an inconvenience to them.  They consider homeless to be lazy bums, mentally ill, drug addicts and alcoholics.  And certainly, that's true in some cases, but it's also true many are not.  Some police departments do try to direct homeless to areas where they can get help, but not enough from the articles I read.  Some police enforce the statutes, some look the other way feeling there are more important things to do.  There doesn't seem to be a standard.

This isn't being written to make people choose sides, but to open peoples minds about the extent of homelessness and it's associated problems.  Homeless try to be invisible, they don't want to be noticed. They don't want to wear bright colors, thus my constant request for dark colors, items with minimal stripes.  By not calling attention to themselves, they have a better chance of going unnoticed by police and others.  The Police are charged with upholding the law and so that automatically puts them against homeless people and all that it entails.

Some people say that homeless are lazy.  I think the energy it takes to stay alive, to stay safe, to find food, to find lodging, to move from the street to the shelter and back again, and to stay away from the police takes alot of energy; both mentally and physically.

We do what we can to help ease their burden by supplying them with warmth in the form of hats, scarves, mittens, slippers, and socks.  We collect and donate personal care items, that are so needed, how else will they be able to clean up, to feel more human, to be able to work.  YES, many homeless do have jobs.  Many homeless are children who need to go to school.

Can you do something to help?  The answer is YES.  There is something everyone can do, it's just a matter of what you're financial, physically, and emotionally are able to do.