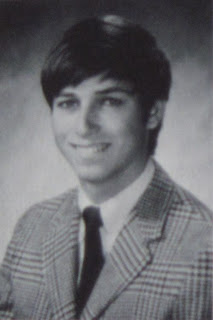 Meet my fellow classmate and friend, Jack Otis. By the hair style you might be able to guess the photo is from the sixty's. 1969 was the graduating year to be exact. Look at that infectious smile and twinkle in his eyes. Now for younger folks, seeing this picture -- you might be shocked to see someone dressed for their senior picture. Being barefoot, in casual clothes, outside leaning on a tree or sitting with the family pet was never ever done! The men always wore coats and ties.  Your picture couldn't be put in the year book otherwise.

Jack and I graduated from Whetstone High School back in 1969 in Columbus, Ohio. Unlike most of my classmates I didn't know Jack for eons and eons. We didn't attend grade school and junior high together.  His family didn't live in the same neighborhood forever, like so many of us. In fact, very little is known about Jack's family. Jack lived with his Dad. None of us knew anything about his mother, except that she wasn't around. Those who knew his home life, remembered his Dad as not being a particularly stable person. Jack was new to our school, he came from someplace in Kentucky. Some classmates believe he moved around a lot.

During those high school years, classmates remember Jack as fun to be with, perhaps even a bit on the wilder side. He was full of life, a bit ornery. Not wild as in bad, but not a mild quiet, stay to oneself type of person. He liked to drink PBR (translation for the younger set, Pabst Blue Ribbon Beer). I should also add that drinking at age 18 was legal back in our day. We had what was called low beer, 3.2 and those 18-19 and 20 could drink that, but you had to be 21 to drink hard liquor and or high beer...high beer is the beer that's out now days. 3.2 no longer exists.

Jack like to drive around on old trails in his Bugged Eyed Sprite (sports car). He was chosen to be Nancy Edgars' escort for The Home Coming Court. That was a big deal, back in the day. Jack was popular folks. He was well liked, he was good looking guy...which you can clearly see from his picture. 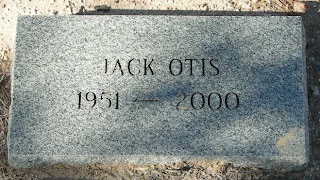 He died in the year 2000, alone and penny-less. He died homeless in the outskirts of Tucson, Arizona. He lived in a hobo camp outside the city limits and is buried in a small paupers grave in Pima County, Arizona. That area set aside in the cemetery for those without family, those who are indigent, those who have no means of another burial.  He was 49 years young.  I was heart broken when I pieced together his story, as were many of my classmates.  Searching for classmates for a class reunion is how this sad story came to light.  I was contacted by an old friend of his who shared that he had been working in North Central Wyoming in 1981 as a doodlebugger on seismic crews drilling for oil on ranches.  He went from there to Colorado and worked, but after that they lost touch.  I don't know or when he ended up in Arizona, or when he started riding the rails.

What happened to make this smiling good looking young man die alone and homeless? We know he chose to travel some after graduation, and for a short while, we know a fellow classmate gave him lodging in Tucson. That didn't last long, as Jack returned to the hobo camp and died sometime later.  This is the sad face of homelessness folks. I'm willing to bet you all have someone in your past with a similar story. He was someone's son. He was a friend. It makes me sad to know he's buried in a pauper's grave. The reality that truly anyone can be homeless is a sobering fact.